Woman strips to underwear on Jet2 plane and storms cockpit 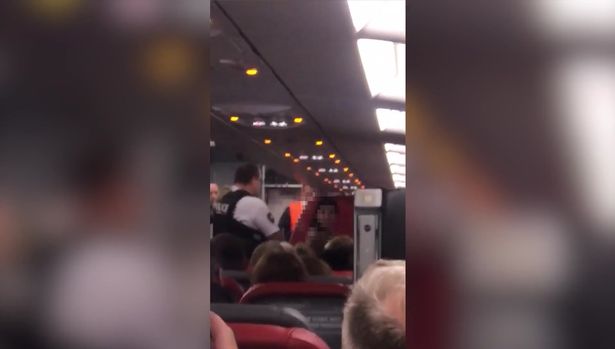 A guy has been praised as a hero for preventing an insane woman shouting “Allahu Akbar” from getting into the cockpit of an aeroplane.

The horrible occurrence occurred on a Jet2 flight from Larnaca, Cyprus, to Manchester on Tuesday, but it was forced to detour to Paris (August 9).

The man, who runs a drainage business and once worked for a security company, was travelling with six family members.

Along with his wife and three of the six children, he said: “Everything was normal until shortly after takeoff when a woman walked up the aisle in her underwear and pounded on the cockpit door

“So when the woman went to the cockpit again I took control, took her to the ground and at that point the pilot did an emergency landing to Paris.”

Mr O’Brien said he asked the woman why she was saying such things and she replied: “If I didn’t there’s going to be an explosion and everybody is going to die”.

Video footage of the incident shows police boarding the flight to apprehend the crazed woman.

Her identity is unknown at this stage, and it is not known if she was handed over to British forces by officials in Paris, but the Daily Star has contacted Greater Manchester Police for comment.

A spokesman for Jet2 has confirmed that the Larnaca to Manchester flight was diverted to Paris early in the morning on Tuesday so that the “disruptive passenger could be offloaded”.