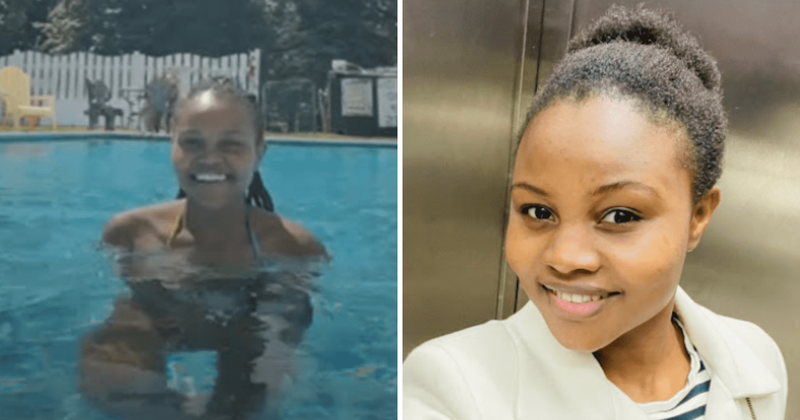 Living in Canada, the Kenyan nurse Hellen Wendy Nyabuto lost her life in a pool while live-streaming on Facebook. Hellen Wendy Nyabuto has been recognised as the nurse. The event took place while the 24-year-old was a guest at the Key Motel in Chatsworth, Ontario. Hellen Wendy, who had dove in from the shallow end, could be seen on the video fighting to stay afloat. Thursday, August 18, saw her passing.

Three hours later, two men discovered the body of Hellen Wendy Nyabuto at the bottom of the pool, as The Daily Mail reported. The sad situation was first brought to his attention by a text message from one of Nyabuto’s friends, according to her father, Kiyondi Nyabuto. Since then, she’s been obtaining funds through a GoFundMe.

Nyabuto reportedly smiled and was upbeat throughout her Facebook Live session, according to The Daily Mail. The Kenyan nurse was frequently seen entering and exiting the pool to check her phone. She repeatedly lowered her head under the pool, the media stated. After over ten minutes of self-recording, the Canadian citizen was soon seen screaming and kicking and waving her arms while battling to breathe.

Before her body was finally found, the live feed video continued for another three hours. The Star reports that because of Nyabuto’s long, curly hair and multicoloured one-piece, two men thought she was a poodle and went looking for her body.

In a CNN interview, the deceased’s sister Enock stated, “She has been in Canada for almost three years,” adding that she had taken over as the family’s primary breadwinner from her father Kyondi Nyabuto and was assisting the family in paying for the other five siblings’ education. She was helping me out financially by paying for my siblings’ education, especially for the school fees and other costs. I’ve reached a dead end and must start over. Her father remarked, “I’m concerned about how her younger siblings will finish their education.

Nyabuto’s father stated, “She travelled to Canada and came safely,” in an interview with Citizen TV. She travelled there to further her education, and as she had earlier informed me, she worked at a hospital in Canada.