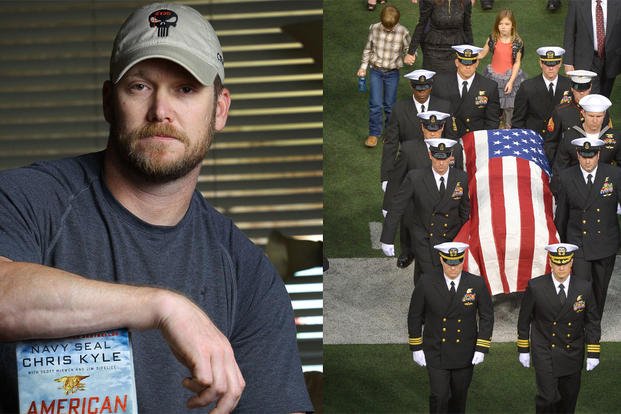 Chris Kyle, referred to as the “deadliest sniper in US military history,” led a life deserving of the successful movie made in his honour before his untimely passing.

Kyle, 38, and his friend Chad Littlefield were shot and killed at a shooting range by troubled veteran Eddie Ray Routh.

Kyle, who was raised in Texas, reportedly learned to shoot before learning how to ride a bike. Kyle always had a fascination with weapons and had thoughts of being a cowboy.

Following a rodeo accident, Kyle left his career as a professional bronco rider and enlisted in the prestigious Navy SEALs at the age of 24.

Contrary to popular belief, he was quoted as saying in Time Magazine: “If I see a puddle, I will walk over it” He ironically was said to detest water.

Kyle first met Taya in 2001. A year later, they were wed, and they later had two children.

Kyle served in the military from 1999 to 2009 and completed four tours of duty in Iraq. He amassed 160 “career” kills during that time, however the actual number may have been significantly higher.

His adversaries so despised him that they gave him the epithet “al-Shaitan,” which means “The Devil,” and set a $80,000 premium on his head.

According to the American Valor Foundation, Kyle received numerous awards for his gallantry and rose to prominence as a SEAL, earning the nickname “The Legend” among his soldiers.

In addition to surviving numerous helicopter accidents and six IED strikes, he was shot twice in Iraq.

Even though he had a good reputation, Kyle didn’t consider himself the “best” sniper.

In an interview with Time, Kyle discussed the characteristics of a skilled sniper “It’s not patience—I’m not the patient type—but rather a professional discipline.

“I’m not the best shooter out there.

“In fact, I nearly didn’t graduate from sniper school… I was simply placed there by chance, had the good fortune to witness a lot of combat, and was able to take the hits.”

After receiving an honourable discharge in 2009, Kyle and his family relocated to Midlothian, Texas, where they got involved in veteran assistance programmes.

He also gained notoriety following the publication of his autobiography, which Clint Eastwood later turned into a film after he passed away.

The military memoir was a runaway hit, selling 1.2 million copies since its January 2012 release.

Alongside Sienna Miller, Bradley Cooper played Kyle in the 2014 movie American Sniper, which went on to win two Academy Awards.

It wasn’t without controversy, though.

According to a US Navy probe, the former SEAL exaggerated the number of medals he had won.

Critics cited a lack of proof when they questioned accusations that he shot dozens of looters from the New Orleans Superdome following Hurricane Katrina.

He was sued for slander after claiming to have assaulted a man who had insulted Navy SEALS; the man in question was later revealed to be the former Minnesota governor Jesse Ventura.

Routh’s mother begged Kyle to assist her son because of his reputation for supporting soldiers.

In an effort to treat Routh’s post-traumatic stress disorder, the two went him to a shooting range for a therapy session.

Routh, however, used two Kyle-owned firearms to shoot the duo because “nobody would talk to me.”

“I was just travelling in the back seat of the truck, and nobody would talk to me,” Routh recalled after the killings.

“I fired them because they were merely escorting me to the range. I regret it, but they wouldn’t engage in conversation with me. They probably pardoned me.

Before she called 911, he went to his sister Laura Blevin’s residence and recounted what he had done.

Following a brief pursuit on the motorway during which Routh fled in Kyle’s Ford F-350 pickup and collided with a police cruiser, Routh was apprehended.

Kyle emailed Littlefield on the drive to the range, referring to Routh, saying: “This dude is straight-up nuts.”

On February 24, 2015, Routh was determined to have committed the killings.

After his attorneys attempted to claim that he had been mad at the time of the killings, he was sentenced to life in prison without the chance of parole.