Who is Mikayla Paulus? Girlfriend of Adam Simjee killed in robbery near Cheaha State Park

Before beginning their first week of college in Florida this week, Mikayla Paulus and Adam Simjee made the impromptu decision to visit Alabama’s Cheaha State Park.

Traveling was something the couple of 4 ½ years loved to do together, and a day spent in nature seemed like the perfect way to end the summer.

Simjee was fatally shot during a robbery attempt on a National Forest Service Road, turning it instead into a terrifying nightmare. According to investigators, a lady committed the robbery and subsequent murder while “living off the grid” in a camp in the national forest with a number of other individuals.

“I lost the love of my life,’’ Paulus said in an interview with AL.com. “This will be with me forever.”

Late on Tuesday, authorities announced that Yasmine Hider, whose age is unknown, and Krystal Pinkins, 36, are accused with murder, two acts of kidnapping, and two counts of robbery.

The Clay County Jail is where Pinkins is detained. Hider, who was hurt during a gunfight with Simjee, is still being held in prison at UAB Hospital in Birmingham.

Simjee, 22, was ready to start the University of Central Florida’s finance programme, and Paulus, 20, had just started her master’s programme there in counselling.

The pair landed at Clay County’s Cheaha State Park and enjoyed Boulder Rock and the waterfalls there.

They were waved down in the middle of the morning by two women who claimed to be having car issues, and the couple pulled over to offer assistance. They were brought up and instructed to act in this manner.

“I called my dad (to ask for car repair advice), watched some YouTube videos and tried to fix car,’’ Paulus said. “When we realized it couldn’t be fixed, I asked if she needed anything else.”

“She (Hider) pulled a gun, said put your hands up, walk into the woods and drop your phone and keys,’’ Paulus recounted.

Simjee, she said, was a “proud supporter of the Second Amendment” and had tucked his gun in his waistband when they stopped to help the women.

“He had his gun in his waistband the whole time because he said it was suspicious and this is how people get robbed,’’ Paulus said.

“My whole body went numb, but I knew I would at least be OK,’’ she said. “I was terrified, but I knew at any point Adam was going to pull his gun out.”

“He always made sure that I knew that I was protected and taken care of,’’ she said.

Hider asked them for their banking information and cell phone passwords.
“When she (the suspect) dropped her guard for a second, and lowered her gun for a second, he pulled out his gun and told her to get on the ground,’’ Paulus said. “She started messing with her gun and it was jamming but they shot at each other.”

“She was shot three times and he was shot once. Her femur was shattered so she couldn’t get away,’’ she said.

When the shots started, Pinkins, the second female suspect, fled into the woods.

Paulus dialled 911 and talked for around 30 minutes with the dispatchers. She said, “I had to perform chest compressions for the last five minutes.”
After being shot, Simjee became unconscious and never spoke again.

She Paulus remarked, “He went down, and he was struggling.

On Tuesday, while looking for the second suspect, Pinkins, Sheriff Jim Studdard was directed to a sizable number of tents that had been set up in the forest. It was close to the crime scene, perhaps a half mile away, and he described it as a base camp.

The moment the police arrived at the base camp, they saw Pinkins standing close to the tents. A 5-year-old raced out of the woods carrying a loaded shotgun as police were ordering Pinkins on the ground. 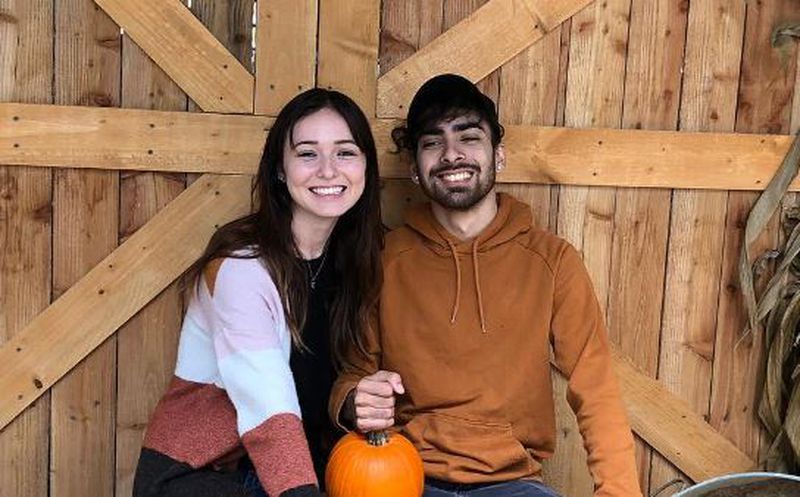 She said her relationship with Simjee was like a fairytale and she had been expecting an engagement ring from him any day.

“He kept it a secret,’’ she said, “but we were definitely going to get married and have kids and be together.”

“Yesterday my world ended. I had to watch as my reason for being, my soulmate, my life partner, the future father of my child, died in the middle of a state park in Alabama. No words can begin to describe the shock and pain I’m in. We had our entire lives ahead of us.

On the face of the entire globe, Adam is the best person I’ve ever met. He had the purest heart, and he gave his life to save mine.

Knowing that he died in a forest in the mountains, one of his favourite settings, gives me peace.

Her greatest fear, according to her, is losing Simjee.

She wrote, “I often asked him what he expected me to do if he died.” He said to take care of our children, which at the time were three cats, so I’ll do that.

Paulus described Simjee as imaginative, intelligent, and giving. She remarked, “He will sacrifice anything for everyone.”

He died protecting her, as he always said he would do.

“If he didn’t have his gun, I don’t know if I would have made it,’’ she said. “So, he really is my hero and that’s exactly something he would do.”

She said the pain is something she’s never experienced nor expected.
“There’s no way this is my real life right now. It’s absolutely horrible,’’ Paulus said. “I can’t imagine it being much worse.”
Asked about the two women who committed the crime, Paulus said, “They were starving and desperate and that’s what people do when they’re desperate.”

Paulus said she feels like she will forever be change.

“I definitely learned that you can’t help anybody anymore. You never know what people’s true intentions are,’’ she said. “You can’t help people anymore without worrying about your safety.”

“Adam, such an intelligent, hard-working, humble, loving human being,’’ the GoFundMe reads. “Adam died protecting Mikayla and will forever be remembered as a hero.”