Who is Gita Gopinath? What she said about Pakistan? 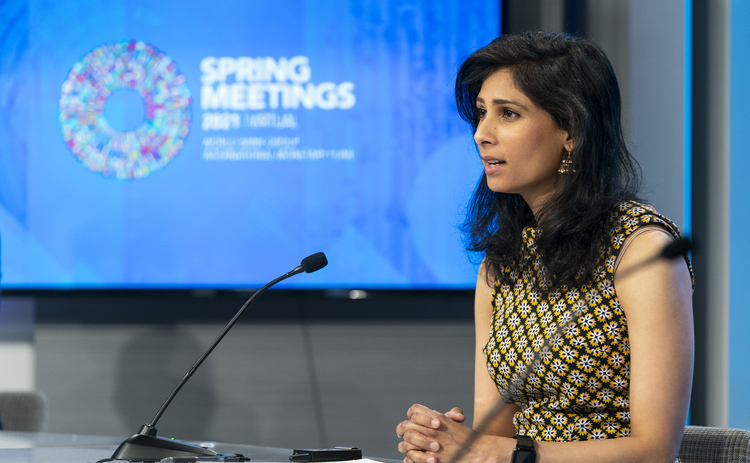 Gita Gopinath, who was born in India, is the IMF’s chief economist (IMF). She is a technocrat, the author of numerous publications, and the author of research articles on global financial crises, emerging markets, trade, and investment. In addition, Gopinath teaches economics at Harvard University.

Gopinath started working as an assistant professor at the Booth School of Business at the University of Chicago in 2001. She moved to Harvard and was hired as a tenured professor after nine years.

She is currently a co-director of the National Bureau of Economic Research’s International Finance and Macroeconomics department and a member of the Federal Reserve Bank of the United States’ advisory council. She had previously served as the Kerala chief minister’s economic counsellor.

At Harvard University, Gita Gopinath holds the John Zwaanstra Chair in Economics and International Studies. She also participated in the Eminent Persons Advisory Group on G-20 Matters for the Union Finance Ministry while in India. Gopinath was named the International Monetary Fund’s top economist in October 2018.

Gopinath attended school in Mysore before earning a BA in 1992 from Delhi University’s (DU) Lady Shri Ram College for Women. Gopinath thought about getting an MBA but ultimately decided against it and enrolled in the Delhi School of Economics. She enrolled in a five-year PhD programme at the University of Washington in Seattle in 2001. She was the best student they had in 20 years, according to her professor, who suggested her to Harvard and Princeton. In 2001, she earned her PhD from Princeton University. Renowned economists like Kenneth Rogoff and former Federal Reserve chairman Ben Bernanke were assigned to advise Gita.

The World Economic Forum selected Gopinath as a Young Global Leader in 2011. (WEF). In 2014, the IMF ranked her as one of the top 25 economists under 45. She won the University of Washington’s Distinguished Alumnus Award in 2017. Gita Gopinath was selected by MD Christine Lagarde to the positions of Economic Counselor and Director of the IMF’s Research Department at the age of 47. She was also chosen as a fellow of the Econometric Society and the American Academy of Arts and Sciences in that same year. She was recognised as one of the year’s Top Global Thinkers by Foreign Policy in 2019. She received the Pravasi Bharatiya Samman, the highest honour given to Indians living abroad, from the Indian government. She received the Woodrow Wilson Fellowship from Princeton.

Gita Gopinath, a current US citizen, was born on December 8, 1971, in Kolkata to middle-class Indian parents. T V Gopinath and V C Vijayalakshmi, her parents, are natives of Kerala. Iqbal Singh Dhaliwal, the executive director of the Poverty Action Lab at Massachusetts Institute of Technology, is married to Gita. She attended Delhi School of Economics with Iqbal, who started his career as an IAS officer after winning the civil services examination in 1995.

What Did Gita Gopinath Said About Pakistan?

For a number of developing countries, including Egypt, Malawi, Pakistan, and Ecuador, who are all experiencing a hard economic squeeze as the costs of debt servicing continue to grow, there is little hope in sight.

These so-called “frontier markets,” which are already coping with the effects of Russia’s war in Ukraine and the Federal Reserve’s tightening cycle to cool US inflation, are expected to experience increased pressure as a result of the debt crisis, according to officials from the International Monetary Fund (IMF) and other organisations.

The Covid-19 pandemic’s impacts are still being seen in several of these nations.

Countries are increasingly depending on the assistance of the IMF to fill financing gaps as a result of being shut out of the global loan markets and China redefining its position as the preferred lender to many poorer nations.

“Their fiscal space to deal with all of this is very little,” Gita Gopinath, the IMF‘s first deputy managing director, told a seminar on the sidelines of the annual IMF-World Bank Meeting. “We will grapple (with this) for several months to come.”

Since Russia invaded Ukraine in February, the Washington-based lender has agreed to new programmes or enhanced existing ones for 18 countries totaling $90 billion, according to managing director Kristalina Georgieva. With support extended since the commencement of Covid-19, 93 nations have received a total of $260 billion, and another 28 have expressed interest.

After months of delays, Pakistan was able to restart an IMF programme thanks to difficult political choices. However, the feeling of optimism vanished just before the disastrous downpour.

The fund must balance stabilising shaky countries with preventing the abandonment of economic reforms, which are frequently difficult.

“The IMF is trying to strike balance between conditionality and agility,” said Patrick Curran, senior economist at Tellimer, who is in Washington for the international lender’s meetings.

“Countries like Pakistan, Egypt, Lebanon and Sri Lanka can’t simply have the funding without any sort of commitments from the government.”