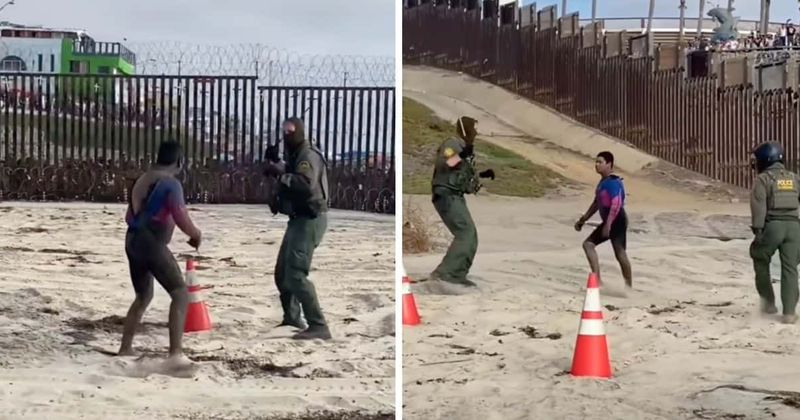 Border Patrol agents and two alleged smugglers got into a fight on Wednesday in San Diego County, California, close to Imperial Beach.

According to the New York Times, the confrontation started when the two unauthorised immigrants were apprehended for breaking the major barrier of the International Boundary Maritime. The video starts with one of the men being taken into custody by Border Patrol agents close to the fence.

The second man, however, is seen making jeers and lunging at a police officer, who then threatens him with his baton in return. More Border Patrol agents eventually show up, encircling the alleged smuggler before one of their colleagues tackles him from behind.

According to Fox, shouting can be heard on the footage coming from the side of the border fence that runs to Tijuana, Mexico. The two migrants in the video, who are 17 and 20, have been taken into custody. Their names have not been released by authorities yet.

Representative Mayra Flores, a Republican from Texas, uploaded the video online and thanked the Border Patrol agents for holding the suspects. She further asserted that because she thinks the present Administration is not doing enough to secure the country’s borders, instances like these would only become more frequent.

“Left without any support by this administration and thanks to their open border policies, disrespect and misconduct toward our law enforcement officials have reached alarming level.”

The first group of the migrant caravan arrived at the Tijuana border yesterday afternoon. #CBP has deployed resources to safely secure the area near Imperial Beach. All seeking entry into the U.S. are urged to present themselves at an official Port of Entry. #USBP pic.twitter.com/uGWUKjxJkj

Texas Republican Representative Chip Roy made the speculative claim that the two migrants might have served as mules for Mexican drug cartels in an official statement.

“Encounters like this will only continue to happen until we secure the border, target and destroy cartels, and actually stand up for the rule of law.”

“Until Republicans decide to dig in and use the power of the purse to take on this administration, this is only going to get worse.”

Mexico is the country from which America receives the most immigrants, according to Pew Research. About 25% of all immigrants in the country, according to statistics from 2018, are from Mexico. However, according to US Government data, the majority of these communities are residents on American soil legally, and the number of undocumented immigrants has been falling over the past ten years.