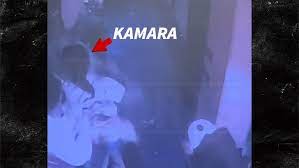 Due to an event that occurred over the Pro Bowl weekend in Las Vegas, Saints running back Alvin Kamara may be subject to criminal prosecution, civil liability, and a league-imposed ban. A fresh video purportedly showing Kamara assaulting the victim has been obtained by TMZ.com.

A person who ends up on the ground is repeatedly punched by a man identified as Kamara by TMZ.com. Others join the assault, stomping and kicking the victim.

According to “sources,” the claimed victim turned violent prior to the attack seen on camera, according to TMZ.com.

Darnell Greene filed a lawsuit against Kamara for the alleged injuries he sustained last month. Kamara is also facing felony assault accusations. The date of a hearing is November 9th, Wednesday.

Kamara continues to be subject to a six-game baseline suspension under the Personal Conduct Policy. The likelihood is that the league will wait to act until the criminal case is finished.

The NFL has not given Kamara a compensated leave of absence. There is no cause to think the league will change its stance. The Saints host the Ravens on Monday night.