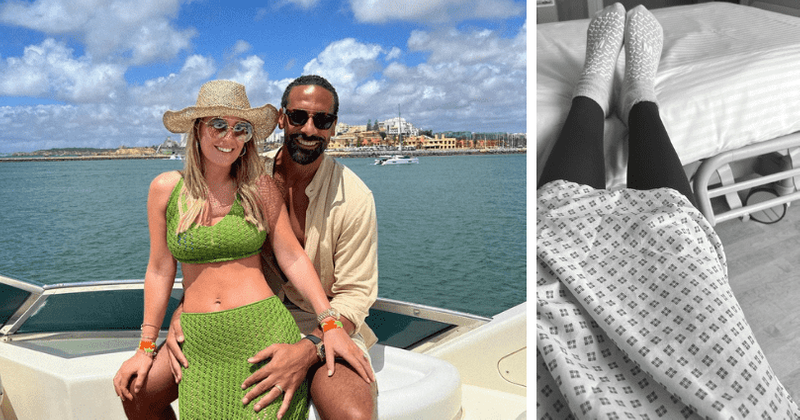 On Wednesday, July 27, Kate Ferdinand broke the terrible news that she had miscarried 12 weeks into her pregnancy. The reality actress, who was expecting a second child with her ex-footballer spouse Rio Ferdinand, said on her Instagram page that she was “heartbroken” and shared a photo from the hospital.

In a heartfelt message to her followers, the former ‘The Only Way Is Essex’ star said she is “devastated” by the loss. In a medical robe and with her feet propped up on a bed, Kate posted a black and white photo of herself online. She revealed to her followers that a scan had failed to reveal the baby’s heartbeat, leading to her hospital admission.

Along with her spouse Rio Ferdinand, Kate also has a son, Cree, who was born in 2020. The last time I was in this hospital, I was having Cree, but this time, I had to have surgery since our baby’s heartbeat was absent during our 12-week ultrasound.

Kate added, “We were so excited & planning a space for our new baby in our family, we just couldn’t wait to share our news with you all, but unfortunately sometimes life just doesn’t go as we plan.”

The reality star claimed she has a lot to say in her essay “But I’m struggling to find the right words. utterly heartbroken and devastated.” She thanked her other children, including Rio’s three children from his first marriage (Lorenz, 16, Tate, 13, and Tia, 11), for their love and support before concluding the letter.

Kate said, “Couldn’t be more grateful for the hugs I got from my big(er) babies coming through the door when we arrived home.”

Reality star Chloe Lewis wrote, “Sending my love to you,” while Amber Dowding said, “So sorry my lovely, thinking of you all.”

Rio and Kate, who had been dating since early 2017, exchanged vows in Turkey in 2019. While on vacation in Dubai in January 2017, the pair initially connected through mutual friends. In August 2017, the pair announced their romance to the world.

Rio’s three children from his marriage to Rebecca Ellison’s mother are proudly raised by the reality TV star as her stepchildren. Rebecca lost her fight with breast cancer in 2015 at the age of 34.

On the “My Little Coco” podcast, Kate recalls Rio pulling out a camera. He was snapping pictures of me, even while I was pushing, she claimed, and there were pictures of him being sprayed with water but none of himself.

“I simply look back and say this man is nuts,” she continued. Kate acknowledged that she was concerned about Rio’s perception of her in the delivery room.

Kate stated: “I want Rio to see me in a good light, but I wouldn’t want him to see me in some of my rougher moments. I was completely exhausted, wearing large hospital underwear, and unable to move when I was lying on this bed.”