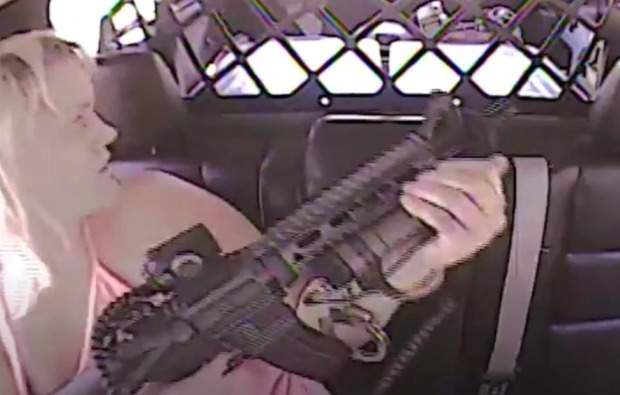 THIS is the shocking moment a meth-addled woman escaped her handcuffs, took a police officer’s AR-15, and then opened fire on the officer.

The 36-year-old Rachel Zion Clay, according to police, was detained in the back of the squad car after she was observed acting strangely in a neighbourhood in Oklahoma, but she wasn’t being arrested.

Clay was discovered crawling about and barking last Friday, prompting officers to arrive at the scene to check on his welfare.

She managed to get her hands free while still being shackled for her own protection, grabbing the cop’s assault gun from the back seat.

She started shooting at the policeman and a bystander before locking herself inside the squad car for three hours.

The moment Clay points the AR-15 out the back window and hits the trigger is shockingly captured on dashcam video from inside the vehicle.

She shot around 10 rounds, according to Grady County Undersheriff Gary Boggess.

KOKH-TV asked him the following questions “She was able to release her wrist from the shackles while in the rear seat of a patrol car, and the handcuffs were correctly fastened.

When she finally figured out how to do it, she lit it on fire and shot about 10 rounds towards our deputies and a bystander.

Following her eventual surrender, police said that the woman tested positive for methamphetamine.

She was detained and kept in prison at the Grady County Jail.

Both the officer and the bystander were hospitalised but their injuries were not life-threatening, and both have already been discharged, according to the authorities.

In order to prevent a repeat of the situation, according to Boggess, his office is already changing its procedures.