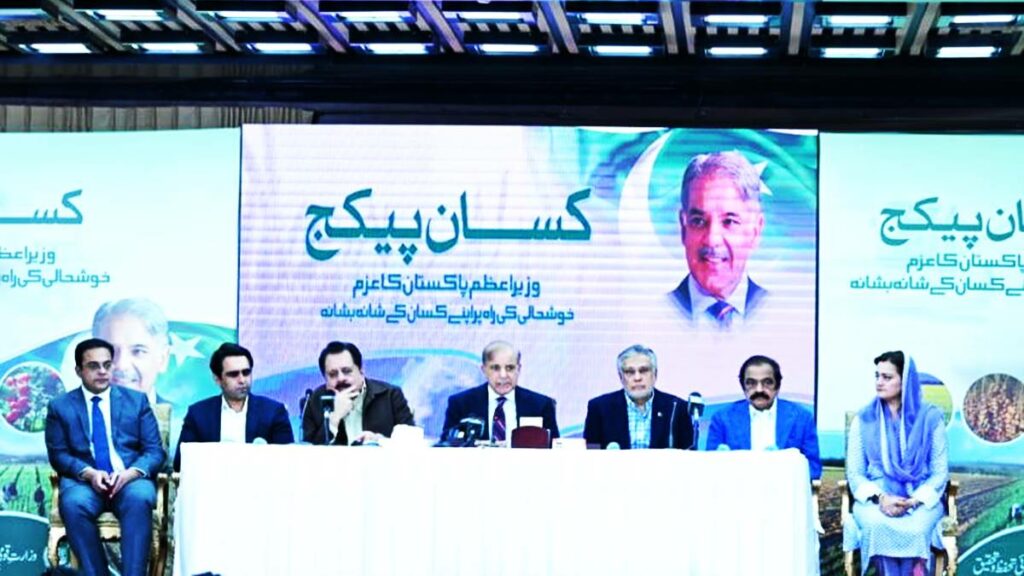 The Kissan Package was unveiled on Monday by Prime Minister (PM) Shehbaz Sharif in an effort to assist farmers in the wake of severe flooding’s damage.

The government will give farmers loans totaling Rs. 1,800 billion, which is four times higher than the previous year, since the prime minister believes that the country’s success can only be achieved through the development of the agricultural sector.

The government will give farmers loans totaling Rs. 1,800 billion, which is four times higher than the previous year, since the prime minister believes that the country’s success can only be achieved through the development of the agricultural sector.

He continued by saying that the commercial banks avoid lending to small farmers and businesspeople in favor of more secure investments, but that Finance Minister Ishaq Dar is fairly tough and will ensure that loans are disbursed to farmers.

Here are the key components of the Kissan Package, which Prime Minister Shehbaz Sharif unveiled to assist the agricultural industry and help farmers recover from the disastrous floods that tore through the nation.

The markup on loans taken by farmers in flood-affected areas has been cancelled, according to the prime minister, and the government has set up roughly Rs. 11 billion for this reason. He continued by saying that the Ministries of Finance and Food Security had devised this package for the nationwide revitalization of the agricultural industry.

Additionally, the Centre and smaller provinces will give loans totaling Rs. 50 billion to young people living in rural areas so they can become professional farmers, in addition to giving more than Rs. 8 billion to small farmers in flood-affected areas. The government will set aside almost 6.5 billion for the project, and young people would receive loans with a markup below the market rate.

Additionally, the government is lowering the cost of fertilizer and urea while maintaining adequate supply. Di-ammonium phosphate (DAP), which would now be available at Rs. 11,250 in the market, was subject to a price cut announced by Prime Minister Shehbaz Sharif of Rs. 2,500 per bag.

A 30 billion rupee subsidy on urea will be offered by the government in the interim, and 500,000 tons of urea would be imported, of which 200,000 tons have already reached Pakistan. The government previously purchased urea for $600 per ton, which would now cost $500 per ton. He commended the industries minister and his team for negotiating the agreement in a way that enabled the government save $100 per ton.

In areas affected by flooding, the prime minister has approved interest-free loans for tenant farmers. He added that the government had increased the value of the Produce Index Unit (PIU) from Rs. 4,000 to Rs. 10,000 in order to qualify for loans for agricultural purposes. “Subsidy of Rs5 billion has been allocated for these loans,” he said.

In addition, the government has allotted Rs. 10 billion for the SMEs modernization scheme for the agriculture sector’s Small and Medium Enterprises (SMEs).

The government has opted to import secondhand tractors to offer a less expensive alternative to more expensive locally constructed tractors because there is a monopoly in the local tractor industry and stakeholders have refused to work with the government, according to Prime Minister Shehbaz Sharif.

In order to assist farmers who cannot afford tractors made locally, the government will import second-hand tractors that are up to five years old (with the appropriate certification). He did, however, add that if the government and the tractor business had worked together, this decision would not have been made because it would harm the regional sector.

The premier also stated that people importing these used tractors older than five years would receive a 50% duty rebate, a 36% rebate for tractors older than three years, and that the concession rates would be determined appropriately. We have decided to grant leniency on the import duty on tractor parts, he said, in order to encourage new players and investors who intend to enter the tractor business.

He added that completely knocked down (CKD) parts have been brought down to 15% from 35%.

In addition, the government intends to start a program to switch Tube Wells to solar power and give farmers monthly payments on their electricity costs.