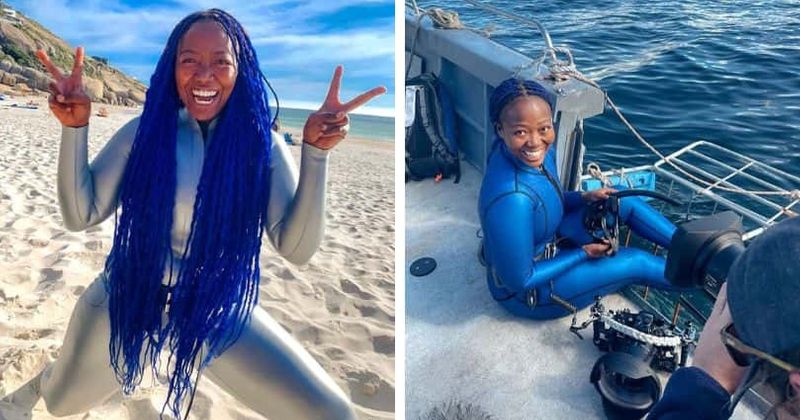 Zandile Ndhlovu, South Africa’s first black freediving instructor, is committed to introducing poor children to the ocean. Ndhlovu, known as the black mermaid, claims that ocean environments need to be more diverse because they have historically excluded Black, Indigenous, and people of colour. For kids living in Langa, she arranges snorkelling outings through the Black Mermaid Foundation. She is also a member of an all-female crew that is strong, talented, and challenging the macho, male-dominated shark “wranglers.”

The 33-year-old fearlessly approaches dangerous great white sharks up close while holding her breath underwater for four minutes at a time in order to conduct a perilous, fast-paced investigation into the puzzling disappearance of the endangered species. Zandile doesn’t only free dive with sharks in the shadowy depths of their feeding zones; she also works with shark biologists Alison Towner, 37, and Leigh de Necker, 31, who both have striking, thigh-skimming blue braids. In order to tag the sharks and observe their new migration patterns, she also wrestles them to hold them on “bait ropes.”

My entire work is to create access to ocean spaces, particularly for marginalised communities, recognising that proximity doesn’t equate to access and so what does it mean to bridge the gap. I grew up in Soweto, where we grew up far from the ocean. In 2016, it was a major issue. Zandile said, “I work in Langa and I take the kids out on snorkel excursions. It goes back to the fact that when I grew up I didn’t realise that there was a life

A @SharkWeek first! Since 1988, this is the first show to have an all Women cast, what a time to be alive! 10pm ET on @Discovery @discoveryplus #SharkWeek #SharkWeek2022 pic.twitter.com/m4sXn26kN4

For most people, it would be terrifying to step foot in South Africa’s Shark Alley, the great white capital of the world and the equivalent of “the McDonald’s drive-through” for sharks. However, as a brand-new television documentary airing as part of Discovery’s “Shark Week” shows, this risky dive is an exhilarating challenge. Her goal is to retrieve an acoustic receiver that has been collecting information from any tagged sharks that have been swimming through Shark Alley and is currently submerged there. “When you’re underwater, there are no words to describe how enormous great white sharks are. They are no child’s play. Anything may happen and if it’s your time, you will know it,” Zandile tells Daily Mail.

“I will not lie, I was scared. I’ve never been so nervous. People think that the kelp forests prevent great white sharks entering the space. But that’s not true and I was terrified because you’re in this place with an abundance of food and you don’t want to be right next to the food truck when one turns up. I came face to face with pajama sharks and leopard sharks. But every single moment, when this strong swell comes through, you don’t know what else is coming. I recognize every time I enter the ocean that I’m on borrowed time”,

She went on. Zandile takes a risky dive into the kelp forest where great whites frequently patrol since it is one of the best methods to find an apex predator like the great white is to follow its prey. The waters are dark and hunting season is at its height. She claims that her ability to hold her breath for four minutes underwater is her “superpower.”

“With no bubbles, noise, or the distraction of flashy diving gear for the marine creatures, free diving enables you to come closer to nature. Since sharks use their teeth to taste, you must develop a strategy for responding if anything hazardous approaches “Zandile explains. “Therefore, it’s important to be able to control your heart rate as doing so will lead you to use up precious energy and oxygen reserves. So whatever happens that freaks you out, you need to pause, calm down and get out of it safely, often with a slow ascent so as not to alarm the sharks.”

Her coworker Alison, who was born in Lancashire, England, has examined, tagged, and written about hundreds of great white sharks over the course of 15 years. She has a special connection to the observation of six of them, but starting in 2017, great white sharks that had been regularly sighted off the coast of Gansbaai, South Africa, started to suddenly vanish.

As a result, the crew tries to implant a satellite tag into a passing huge great white shark to provide important information about her activities in real-time that could perhaps lead them to the others. She is desperate to find her missing murdering family as a result. After some time, the female crew struck gold when they caught and tagged a huge female shark that weighed close to two tonnes. Leigh takes the responsibility for working the bait line and luring a great white to the boat, while Zandile is in the shark diving cage taking research photos while Alison uses all her strength to get the satellite tag into a female white shark.

Due to the abundance of Cape fur seals, the great white shark’s primary food supply, great whites frequently congregate in the waters near South Africa. However, the number of sharks has decreased from up to 900 to as few as 522, and this is because the predator has turned into the prey. The strange disappearance of great white sharks from Cape Town, South Africa, was reported in 2019, and all available data suggested that orcas were migrating through the area. A 600 square mile area of the Atlantic Ocean saw an average of 205 great white sightings per year between 2010 and 2016. There were only 50 in 2018, and so far this year, there hasn’t been a single one of the dreaded great whites.