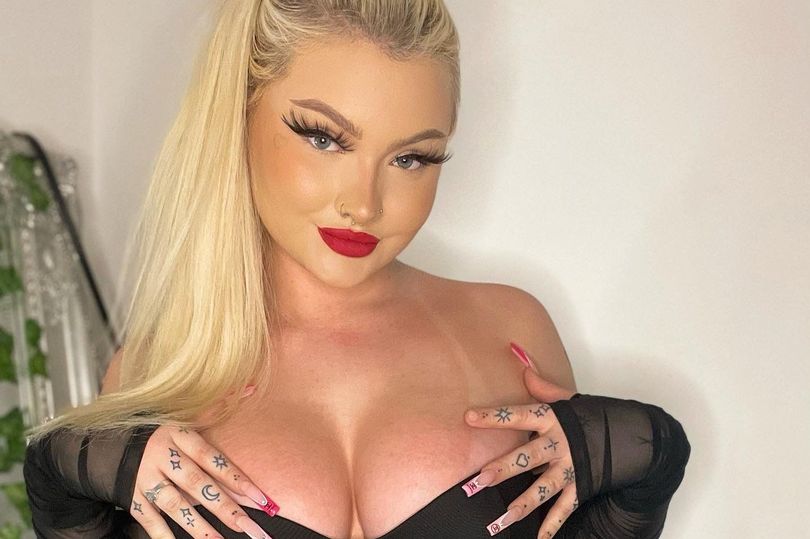 Lowri Rose-Williams attended church twice on a Sunday as a teen, and she alleges that she was forbidden from texting boys and from accessing the internet. She’s shattering it right now.

The 23-year-old from Swansea is well-known online thanks to his success on the subscription site OnlyFans after gaining hundreds of thousands of followers on TikTok and Instagram. She rose to the top 1% of creators on the platform in less than 18 months, ranking among the top earners globally and making tens of thousands of pounds in the process.

As she thinks on how far she has come both professionally and personally, Lowri shares experiences from the last few years with us as we sit in a busy coffee shop in the heart of Cardiff, where she currently resides. Since she tells me, that has not always been the case, even if her eye-catching pink highlights, meticulously tattooed arms, and Playboy nose stud tell the story of a young woman who is now undeniably free to express herself as she pleases.

“I’ve always been interested in dressing a certain way, having tattoos and piercings and stuff, but I was never allowed,” she said. “My family are like old school Christians, so they were very, very strict on everything, including music tastes and clothes. To be honest, my whole life was just church, church, church. We went there twice on a Sunday and a few times in the week.”

“I wasn’t allowed to have boyfriends or to text boys, and I was even banned from the internet. I got my first tattoo at 18 and my mum didn’t speak to me on my birthday because she was so fuming. I think she thought I was going to get a little one, but it was these two roses, which I’ve obviously added to since then,” she laughed as she looked down at her arms. “She’d be livid if she saw me now.”

Despite growing up in a strict environment, Lowri discovered at age 18 that she could express herself on the new social media platform TikTok by dressing up and making videos that were watched by thousands of people. She quickly “blew up” and became popular on the app, gaining over 500,000 followers and having millions of views on her videos.

She moved to the city at about the same time, leaving her family’s home in Swansea, to enrol in Cardiff University’s law programme. She had a lot going on, so she ended up quitting that degree three times because “it just wasn’t for me.” However, she was also learning a lot about herself thanks to a job dancing on the bar at Coyote Ugly, which allowed her to let loose the attitude and eroticism she had felt she had to repress as a child.

“Ever since I was little, I’ve always wanted to do something performative,” she said. “Dancing, acting, singing, modelling, anything like that. TikTok gave me the opportunity to perform to an audience, even if that was doing dancing videos and silly Power Rangers cosplay stuff. It was the same with Coyote Ugly. When I started working there, I began to dress a little more sexy and my style started to change.”

Eventually though, Lowri’s content started to adapt to her audience. She understood that many other content producers her age were shifting toward more adult content, with many of them opening up accounts on OnlyFans, even though she had previously drawn a TikTok audience that was primarily made up of kids and teenagers.

“I’d been following this girl for a few years and she followed me back because she’d seen me on TikTok,” she said. “We were just chatting and then I ended up going over to her house and she set up a whole OnlyFans page for me. She’s in the top 0.7% of creators on there so she really knew what she was doing.

“We spent the whole day sorting out the ins and outs, all the legal stuff, everything. I was quite fortunate to have that really, because if I hadn’t had that, I don’t think I would have made as much money.”