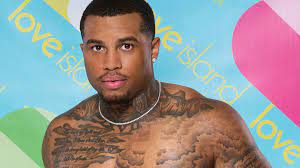 In the most recent Love Island USA Season 4 episode, two fresh bombshells entered the villa. The ladies of the show gave Bryce Fins and Jeff Christian a hearty shout.

From the minute he arrived at the estate, Jeff began to exhibit interest in Zeta Morrison. Timmy, her ex-partner, was envious of their hot kiss in front of the islanders. However, despite attempts by the other females in the villa, especially Bria, to catch Jeff’s attention, he spent the whole July 29 show concentrating on Zeta.

Jeff will find a mate during the first round of recoupling in the upcoming episode.

Athlete Jeff Christian, 25, is from Cincinnati, Ohio. At Southern University, Ohio University, and A&M College, he played football as a student.

Jeff hails from a family of athletes because his grandfather coached Muhammad Ali and Aaron Pryor, two great boxers. He claimed to have 40 tattoos on his body and plans to get more in a press release.

The current episode’s chemistry between Zeta and Jeff was well-liked by Love Island USA viewers. Prior to the final recoupling, Zeta was coupled with Timmy; nonetheless, Bria chose him. Zeta was devastated by Timmy and Bria despite their promising beginning.

She drew Jeff’s attention in the most recent show, and ever since, they have been making out. Zeta should choose Jeff in the next episode, according to viewers. Check out the responses from the audience:

I wish Zeta picks Jeff. Timmy has not being it lately #LoveIslandUSA

I love Jeff and Zeta #loveislandusa

Omg Jeff and zeta ….. that was so damn hot #loveislandusa pic.twitter.com/oEszu470jD

Jeff came for Zeta, OK?! HE LEAVING WITH SOMETHING. #LoveIslandUSA

Jeff came for my sis Zeta. Went straight to have that one on one talk 😏 #LoveIslandUSA pic.twitter.com/1L8xnAcorR

I want zeta to pick Jeff soooo bad. I need this intensity for at least 1 more episode lol #LoveIslandUSA

Who was recoupled in the latest episode of Love Island USA?

‘YOU’ Season 4 Premiere Dates Announced, To Be Split Into Two Parts