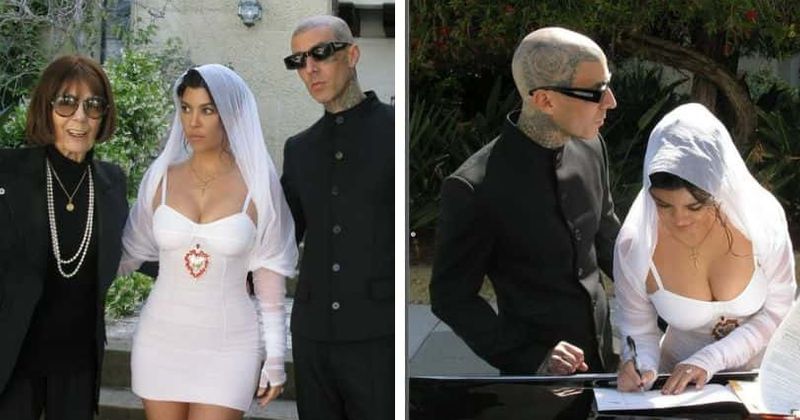 Several previously unseen images from Kourtney Kardashian and Travis Barker’s courthouse nuptials in May 2022 have been made public. As one of the two guests the pair brought with them to their private wedding ceremony in Santa Barbara, California, the “Kardashians” actress posted the photographs to honour her grandmother Mary Jo Campbell’s birthday.

In the first two pictures, Kourtney Kardashian, 43, and her grandmother MJ are seen sipping champagne at a restaurant. Kourtney is wearing a matching cloak and her short, handmade Dolce and Gabbana wedding dress.

The third image shows MJ, Kardashian, Travis, and Randy Barker, Travis’ father, in front of the courthouse, where they performed their legal duty on May 15. In the fourth photo, which also features the four people standing together, Barker, 46, can be seen kissing Kourtney on the head as she stares directly into the lens.

In the fifth and final image, Barker and Kardashian are seen marking what appears to be a marriage licence with a pen.

The couple stunned Italy with a spectacular wedding ceremony after having a brief adventure in Vegas and getting married in a courthouse in Santa Barbara. Friends and relatives who had the time to travel to Castello Brown in Portofino were with Kourtney.

The couple wanted to hold a third ceremony in part so that their friends may join them in celebrating this special event. You might recognise names like Machine Gun Kelly, Megan Fox, Devin Booker, Lil Huddy, and others right away.

Mark Hoppus, a Blink-182 member and longtime friend of Barker, also attended the wedding. Together with his wife Skye Hoppus, he attended the occasion.

The Kardashian family appeared elegant and event-appropriate. Kim Kardashian chose a unique hairstyle that undoubtedly caught people’s attention. Khloe Kardashian looked amazing in her black gown and attention-grabbing headpiece. Kylie had a stunning appearance with her grey gown and understated hairstyle. Similar steps were taken by Kendall Jenner, who wore a modest gown and had her hair pinned back.

Travis Barker, who had been complaining of unease, was unexpectedly taken to the hospital in June. The well-known musician revealed the specifics of his unexpected hospitalisation on Instagram, upsetting his followers. Kourtney Kardashian, Travis’ wife, who had visited the drummer in the hospital, also provided details about the incident via her Instagram page.

Travis Barker shared in his Instagram story that he had pancreatitis, which was extremely painful and potentially fatal. The drummer continued by thanking everyone for their assistance and expressing how much better he was feeling. Kourtney, who has around 190 million Instagram followers, thanked the medical staff for curing her musician husband.