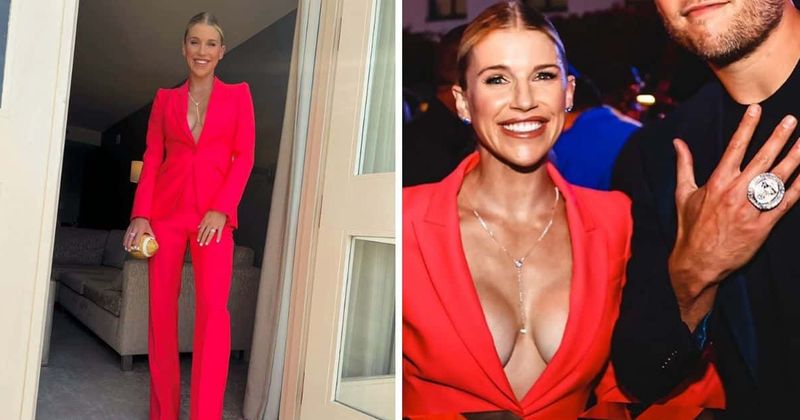 Kelly Stafford, host of The Morning After podcast and wife of Super Bowl-winning Rams quarterback Matthew Stafford, mocked those who told her what to wear by showing up in a pantsuit to the team’s special ring ceremony last Thursday in Los Angeles.

In a post on Instagram on Wednesday, Kelly acknowledged that her fiery appearance went against the norm. She said, “I get so many DMs telling me I need to dress more feminine… so, I donned a suit.”

Many of her followers were inspired by this deed of hers. His admirers and friends praised her for not letting comments about her appearance affect her. The clap back we NEED in 2022: “Never change Kelly, we adore you,” was one person’s comment. A second person said, “I adore how genuine you are about who you are. Sweats don’t detract from a girl’s femininity. Haters are going to hate. Keep motivating people!”

Kelly sported an alluring suit by Alexander McQueen that had pleated pants and a plunging neckline. The beauty exited the house with a gold-accented Judith Leiber football-shaped handbag. She was donning a pair of Gianvito Rossi silver open-toe shoes.

Stafford is still acclimating to Instagram’s user interface, though. The Rams’ Instagram account posted a video making fun of the quarterback this week when he reported to training camp, criticising him for not returning the favour by following the team on the social media network. Stafford was questioned in the video about if he intended to follow the Rams back on Instagram. “Maybe. I have no idea how to operate any of that. I’m certain I will “Stafford remarked.

Kelly also posted the video and made fun of her husband, with whom she has four daughters: Chandler and Sawyer, twins who are five; Hunter, who is three; and Tyler, who is almost two. She claimed that Stafford is still unable to use Instagram. Kelly also appeared to take credit for the star quarterback’s choice to sign up for the social networking platform.