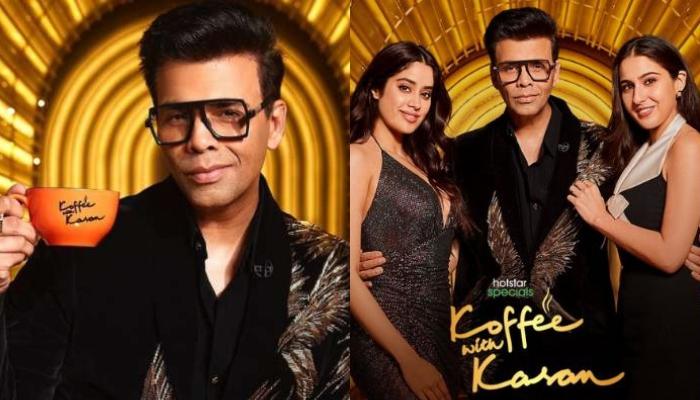 Koffee With Karan, one of the most watched reality programmes, is recognised for revealing some of the funny innermost secrets of well-known figures in the entertainment business. The show is hosted by Bollywood director Karan Johar, who is able to get on many of B-A-listers town’s because of his strong ties with them. He then roasts them with insider information. Since July 7, 2022, the reality show has been debuting on the OTT platform Disney+hotstar.

Two Bollywood diva stars, Janhvi Kapoor and Sara Ali Khan, graced the show on episode two of season 7. Both Sara and Janhvi revealed numerous secrets about their lives during their talk. Karan Johar was seen participating in a buzzer round on one episode where they were asked a number of questions. However, accusations that Karan Johar and his team plagiarised the questionnaire’s script in its entirety were made.

The IP I script Karan Johar used during one of the portions of his show’s second episode, Manya Lohit Ahuja, a netizen and writer, claimed on her Twitter account that it was fully based on her original content. She continued by saying that she had created a similar questionnaire for iDiva, asking users to name movies based on a suggestion provided above their choice of movie. However, without her consent or credit, questions were used in a portion of Karan’s programme headlined “Calling all Bollywood Buffs: Guess the Movie with the Help of These Badly Explained Plots.” Tweeted by her:

“So #KoffeeWithKaran lifted the IPI started at @iDivaOfficial and used the whole copy verbatim??? I came up with this concept and I had a lot of fun writing these but to not be credited just because it was frivolous is not acceptable!? If you lift the copy, give the credit.” 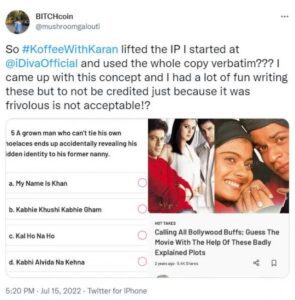 Furthermore, she said in the same Tweet thread that while she may come off as frivolous, she actually wants credit for the things she has generated. She included the content created for iDiva in 2020 and tagged StarWorldIndia, Disney Plus Hotstar, and director Karan Johar in addition to the OTT platform. Look into: