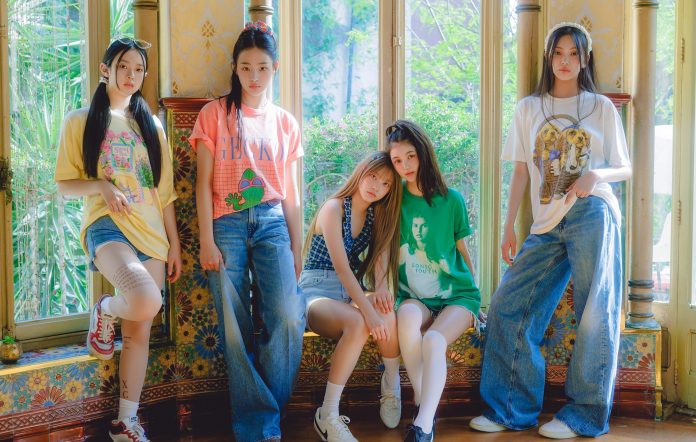 NewJeans, a new girl group from HYBE, made K-pop history even before their debut. After the release of their debut music video for their title tune, Attention, the five-member female group, formed by HYBE’s sub-label ADOR and led by former SM Entertainment creative director Min Hee Jin, piqued the interest of the audience.

The upcoming self-titled debut EP from NewJeans has already topped 444,000 stock pre-orders in Gaon history in just four days, according to an official announcement made on July 28 by HYBE and ADOR.

With this, NewJeans has broken the previous record for the most stock pre-orders for a girl group’s debut album.

loving the fact that NewJeans members wrote their own music themselves for their debut album and they all definitely did so well! pic.twitter.com/lj67vKMHk6

The five-member act, which consists of Minji, Hanni, Hyein, Haerin, and Danielle, has quickly grabbed the hearts of K-pop fans because to their excellent music and content, minimum promotional efforts, and risky decision to release the group’s songs without warning.

With their recent achievement of 444,000 stock pre-orders in just four days, the girl group is ascending to new heights, and fans are excited to see what else they can accomplish.

For those who are unfamiliar, the quantity of album stock created before to an album’s release is indicated by the number of stock pre-orders. The number represents the expected demand determined by a number of variables, including the number of albums that fans pre-ordered.

The Hurt hitmakers have eclipsed aespa, who received 401, 000 stock pre-orders for Savage, with this new milestone.

Within only 3 days of preorder, #NewJeans smashed the record of the highest girlgroup debut album preorder in Gaon history – already past 440k sales.

people be questioning the amount of preorder sales newjeans have when in fact they're alrdy getting so much hype after attention came out, clearly that's what happens if you make great music

The female group is the only Gen 4 girl group in Ktown4u history to exceed 100K pre-orders, joining the ranks of aespa’s Girls and Savage and ITZY’s CHECKMATE.

stans can preorder their faves next album having no idea how any of the songs are gonna sound but we can’t preorder newjeans’ album despite having listened to 3/4 of the songs?

The girl group’s imminent debut and its future undertakings are both highly anticipated by fans.

On August 1, The Attention singers’ debut EP and Cookie, the third and final title track’s music video, will both be made available online. The physical EP will be available a week later, on August 8.

400k preorder goal achieved! now let's work extra hard and do our best with the rest of the goals and exceed them!

The group’s merchandising bag, which has a distinctive design that combines a PIN-UP BOOK embellished with pictures of the members, photo cards, and CDs in a circular bag, is soaring in popularity and was completely sold out on July 26.

The group’s new pre-order item, a limited edition merchandising bag in white, black, and red, has sold over 4000 copies in just two hours on Ktown4u.

Like a pair of everyday denim jeans that are always in style, the group strives to be stylish and enduring symbols. The term “New Genes” is also used in the name.

The girl group’s songs are all available on the official YouTube channel of HYBE LABELS, but none have been released yet on any music streaming services.