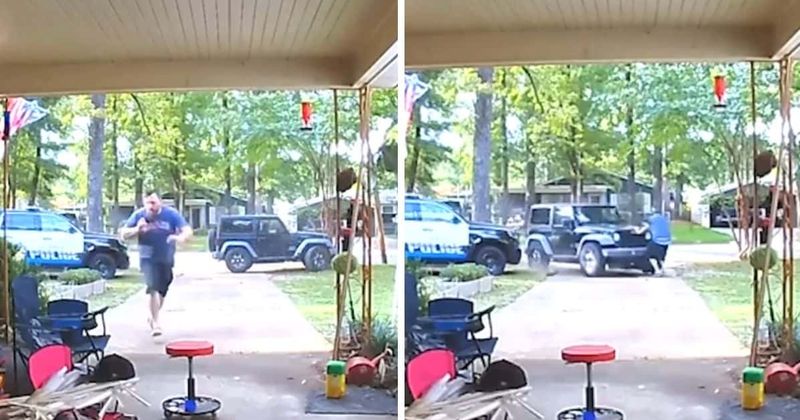 DECATUR, GEORGIA: A doorbell camera caught the terrifying scenes of a man attempting to run over an off-duty police officer on his front lawn in a jeep. Officer Jack Brown noticed a man waiting near his residence in a black Jeep Wrangler at around 5:17 p.m. on Tuesday, August 16. When Brown approached the driver to see if he needed any assistance, the man reportedly began cursing at the officer.

The automobile narrowly missed Brown and eventually struck a tree, according to video footage obtained from the doorbell camera. Gregory Martin Hill, the car’s driver, was recognised. Hill, 54, has been charged with attempted murder in addition to the alleged assault on the police officer’s front lawn.

The video appears to show that Brown was nearly struck by the Jeep before he collapsed, but he was able to get to his feet and flee home. Hill rushed up the driveway toward the house after getting out of the car, then made a U-turn and dashed back to his vehicle. Then Brown exited from his house brandishing a gun.

According to the evidence, Brown instructed Hill to bow down but Hill refused. When the Jeep was no longer visible to the camera, Hill reversing the vehicle onto the street while disregarding the weapon pointed at him. The Jeep abruptly sped towards the off-duty policeman, who was standing in his front yard.

Additionally, the footage shows Brown firing at the Jeep many times while being struck by the front end of the vehicle. After knocking Brown to the ground, Hill reversing the car again and running over the policeman’s legs. The officer fired at the approaching vehicle, but Hill was uninjured. Hill got out of the car to argue with Brown, but the officer and a witness were able to restrain him. At the scene of the altercation, other police officers arrived to arrest Hill.

Brown was released from Huntsville Hospital later that evening. “He is moving about and doing okay. He and his family want to express their gratitude for everyone’s comments and prayers, “In a statement, the Decatur Police Department said. Hill was initially charged with second-degree assault, but the allegation has since been upgraded to attempted murder. Hill’s bail was set at $1 million by Morgan County District Court Judge Charles Elliott. Irene Cardenas-Martinez, a representative for the Decatur Police Department, reportedly said there isn’t a clear connection between Brown and the suspect, according to Alabama.com.