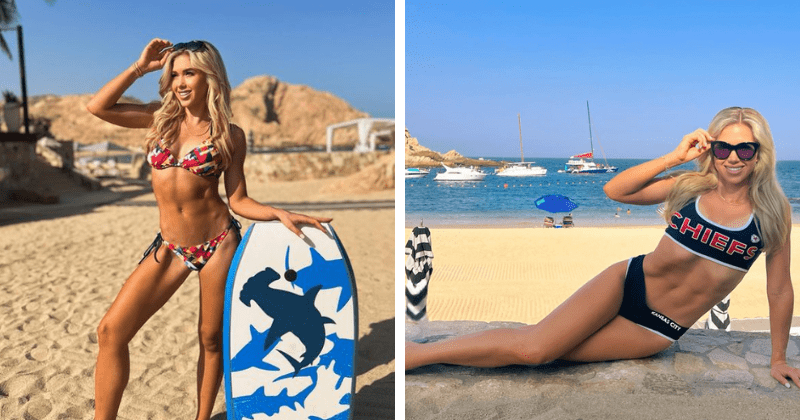 Chiefs owner Clark Hunt’s daughter Gracie Hunt posted on Instagram in support of the squad reporting for training camp. “Chiefs training camp [right arrow] meets #Sharkweek,” she captioned a photo of herself wearing a black and red bikini as she advertised the week-long event that was captured on camera for Discovery Channel.

Gracie said, “Very apt given we have our own shark. #55,” as she praised Chiefs defensive end Frank “The Shark” Clark. The Chiefs’ upcoming season begins on August 2, and while Gracie, 23, is surely enjoying Shark Week, which ends on July 30, she is also preparing for it as club players reported to training camp this week.

Gracie played soccer as a child, but she was forced to give up her dream of becoming a professional after suffering a series of injuries. In an interview with People magazine, she talked about her ambition to play soccer and her hunt for a new passion: “My first interest was soccer. I aspired to play collegiate sports. When I was in high school, both my high school team and my club squad won the championship.” Life, however, had other ideas for her. That was a dream that I could no longer pursue after sustaining four concussions, Gracie recalled. “which is quite challenging when you spend your entire life perfecting something. I needed a new dream.”

Gracie Hunt established the nonprofit organisation “Breaking Barriers Through Sports,” which unites individuals from all backgrounds. When she joined the FC Dallas Special Olympics soccer team in 2015 as a member of the Unified team, she became involved with the Special Olympics. Three years later, she started reporting on Unified events, and she eventually won seats on the Special Olympics boards for Southern Texas and Southern Kansas.

Gracie enrolled at Southern Methodist University in Dallas in 2017 to begin her collegiate career (SMU). She graduated from SMU last year with a bachelor’s degree in sports management. She was also named Miss Kansas USA in April of 2021; she was 22 at the time. Her mother finished as Miss USA’s second runner-up in 1993