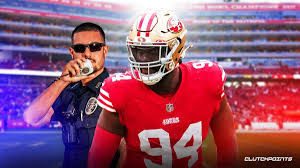 Charles Omenihu, a defensive lineman with the San Francisco 49ers, was detained in San Jose.

According to reports, the 25-year-old former Texas fifth-round pick was detained on Monday afternoon and later released on bail from the Santa Clara County jail.

Omenihu was detained on accusations of misdemeanour domestic assault, according to the East Bay Times.

They add that a lady who identified herself as his girlfriend informed police that she had been “pushed to the ground after an argument.”

Police said that although there were no “obvious physical injuries” present, “she did have a complaint of soreness to her arm.”

A restraining order against the unnamed woman has been served on Omenihu, and according to the police, “the case will be presented to the Santa Clara County District Attorney’s Office for possible charges.”

The 49ers issued a statement through Nick Wagoner in which they stated: “We are aware of the Charles Omenihu matter and are gathering additional facts.”

Omenihu had a career year, recording 4.5 sacks in the regular season, two more in the team’s 41-23 victory over the Seattle Seahawks in the wild-card round, and forcing a fumble.

On January 29, the 49ers and Philadelphia Eagles will square off in the NFC Conference Final.

He joined the team in November 2021 after being traded by the Houston Texans to them in return for a sixth-round pick.

NFC championship game here we come, Omenihu captioned a post on Instagram with the lyrics to Icewear Vizzo’s song Free Kill and a variety of images following last week’s 19-12 Divisional Round victory over the Dallas Cowboys.